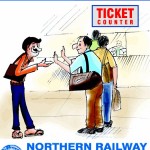 Based o­n source information received, a joint raid was conducted by a team of personnel from RPF Delhi Division and Vigilance Department, Northern Railway at the premises of an unauthorized travel agency M/s. Subhash Travels, Chandni Chowk, Delhi o­n 26.03.2015.

During the raid 15 E-Tickets (issued o­n personal ID) were seized from the unauthorized travel agency. The total value of these tickets is Rs 60,240/-. The owner of the said agency was arrested Under Section 143 of The Railways Act and handed over to Railway Protection Force, Lahori Gate, New Delhi.